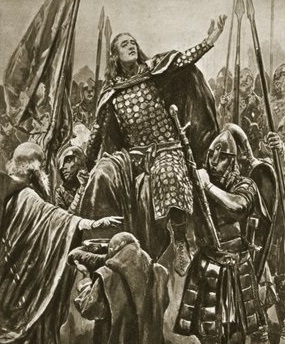 The coronation of Edward the Elder at Kingston-on-Thames in AD 900. Illustration by R.C. Woodville (c.1850).

The politics of tenth-century Britain were dominated by an English (‘Anglo-Saxon’) royal dynasty descended from Alfred the Great. Alfred ruled Wessex, the kingdom of the West Saxons, but his descendants expanded the kingdom until it grew into what we now know as England. The ambitions of the West Saxon dynasty inevitably brought it into contact with the kings of Strathclyde, with whom it had a stormy relationship throughout the tenth century. Dealings between the two kingdoms are studied in detail in Strathclyde and the Anglo-Saxons in the Viking Age, especially in the book’s four central chapters, but I’ll use this blogpost to give a basic summary in the form of a diagram.

The image below is a partial ‘family tree’ of Alfred’s descendants in the tenth century. Recorded dealings with Strathclyde are noted under the names of the individuals concerned, all of whom (except one) were kings of Wessex. The exception was Aethelflaed, Alfred’s daughter, who ruled the former kingdom of Mercia as a semi-independent region. Non-hostile relations, such as peace-treaties and alliances, are marked in green. Hostile relations, such as invasions of Strathclyde, are marked in red.

This entry was posted in Treaties & alliances, Warfare and tagged Strathclyde, West Saxons. Bookmark the permalink.

6 responses to “Strathclyde and Wessex”